This is a language for a conworld that I've had since I was a kid. It exists on the edge of a universe 20 universes away from ours, but I will go into more depth about the world at another time. Although Choroze as a whole is very linguistically diverse, on other planets the upper-mid dialect of the Bulaqond Reloze language is simply known as Choroze, since it is most commonly used for external affairs.

The language uses historical spelling, and the romanization preserves that by having each letter correspond to a letter in the Choroze alphabet. For instance, Choroze is pronounced /ˈhɔɾoɒ/. The alignment is split, with the main clause being nominative/accusative and subordinate clauses being ergative/absolutive. The word order in nominative clauses is similar to the V2 order found in Germanic languages, except that the verb comes second to last. In ergative clauses the verb comes first. Nouns decline for 5 cases and have 4 genders. Verbs decline for 3 persons and 3 tenses. There are loan words and grammar from languages to the north, giving the lexicon a lot of diversity.

Here is the basic phonology to start off with:

is that a name for your new conlang?
You may also continue (create) with grammar, or it will just be like a sketch of a conlanga?
Today, on 4.7.2016, I have successfully collected numbers from over 26,024 ways (languages both: natlangs and also conlangs).
Top

Let's start off with some masculine nouns. These are normally used for masculine people and professions.

Something to note here is the suffix -ze, which changes the meaning of words in unpredictable ways. It is most often used in masculine and animate nouns. Also notice that all nominative forms of nouns except for those with the -ze suffix are identical in singular and plural. This means the number has to be encoded in the verb, and determiners are often used to clarify as well.

Now let's look at a few feminine nouns. Again, they are normally used for people and professions. Many noun roots can be either masculine or feminine. 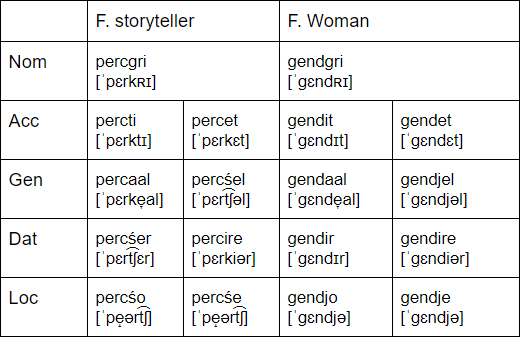 Here we get an example of how [kj] becomes [t͡ʃ]. The c is preserved in spelling.

Some animate nouns. These are usually used for animals, natural phenomena, and some abstract concepts.

Choroze is another example of the -ze suffix, this time on an animate noun. Also note that hiiftso has a different set of declensions from choro. This is because animate nouns used to end in -o or -u. All of the nominative forms have merged, but not all of the declensions have.

And finally, inanimate nouns! These are, well, inanimate objects, as well as some abstract concepts. 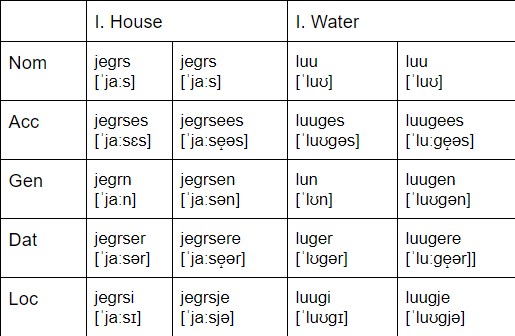 I think I will go over pronouns next. Let me know if anything is unclear or there are any features of the language you would like explained.
Top

JANKO GORENC wrote: ↑20 Sep 2020 23:39 is that a name for your new conlang?
You may also continue (create) with grammar, or it will just be like a sketch of a conlanga?

Yeah, I will be referring to this conlang as Choroze, although I may also refer to it as Bulaqond Reloze. And I've got a lot of grammar written already, I've just been slow in posting it. Also, for your amazing collection, here are the numbers 1-10:

Thank you for remembering my request about numbers.
I wish you a lot of success at your work and continue successfully in the development of Choroze language!
Today, on 4.7.2016, I have successfully collected numbers from over 26,024 ways (languages both: natlangs and also conlangs).
Top
Post Reply
5 posts • Page 1 of 1