There is strong nationalism and militarism in modern-day Vrkhazh, but relatively peaceful. Just don't mess with them.

The dragonfly is a symbol of victory in Yabushio (and Japan). Fitting for an air force emblem.
Top 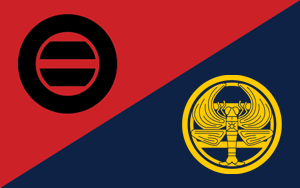 Any thoughts on this? Does this flag look okay? Is it weird to have the navy and air force emblems on the ensign, but no army emblem on the army flag?
Top

Well, I don't know about real-world precedents and all, but from my point of view, having the army flag be the "least marked" military flag generally makes sense. It can make more or less sense depending on how you justify it. Based on what I can remember about Yabushio from just off the top of my head, might they have started out with just a land-based army, or with a land-based army being the only really significant branch of the military? If that doesn't fit in with the actual history (about which you, of course, know best), perhaps the country started out with armed forces on land and at sea (I'm rather certain I remember Yabushio getting its start pre-airplane), but with all forces under the same administration? Once the country and its military grew larger, then perhaps the navy was "broken off" and put under separate administration? The remaining land-forces would remain under the same administration that had until recently controlled the entire military, so I could see them retaining the old, "unified military" flag, while the navy would adopt a derivative flag. Once the air force came along, something similar might happen.

Sorry, I'm in a tiny bit of a rush at the moment, so that might not make sense, but hopefully something in that typed-out stream of consciousness helps at least a little.

I like the looks of the designs you've been posting, by the way; I just don't want to keep making response posts with nothing but "Great work!" in them.
Top

That makes some sense. The country is formed in the early-mid 17th century, so they would not have had an air force at that time. It is an island nation though, so they would likely differentiate land and sea, which I have done. Since the air force is a relatively recent development, it makes sense that the flag would be based off of the navy ensign, requiring them to be differentiated, while the army one could remain as-is. Not that it matters much anyway. This country would never have a significant military force of any kind.

Thanks by the way. I have decided to keep the various logos and emblems and things of this country a little more traditional than in modern Japan, mainly just because I want to. It's fun applying traditional styles on modern things. I'm still considering what I will do for the army and navy emblems. I want them to be traditionally symbolic, like the dragonfly for the air force.
Top

The dragonfly is a symbol of victory in Yabushio (and Japan). Fitting for an air force emblem.

Does this look like it would be an actual flag?

Besides that, does it look nice?

Keep in mind the flag should be circular, so ignore the white background. It's a modified larger version of the flag in my signature. The ratio should be 1:1.
I have absolutely no idea what I'm doing.
Top

I'm wondering how they would fly a circular flag, but I assume you've worked that out. The main comment I can give about realism is the colour. We're used to seeing these kinds of colours on the internet, but as an actual physical flag, they look fluorescent. I suggest looking at real-worldflags and the Pantone website, which is a good resource for print-friendly colours and the primary reference for real-world flag colours anyway.
Top

I probably should have mentioned that the flag was made in Paint and the colors didn't come out exactly as I'd like them. The flag is flown as a square with the actual flag in it like the white part of the image I posted. The background is never white, and is usually black or dark blue. The background color is not part of the flag; it is always shown circular except when it is flown. I'll take a look at the website you suggested later.
I have absolutely no idea what I'm doing.
Top

Here it is cleaned up a bit and with more natural colours: 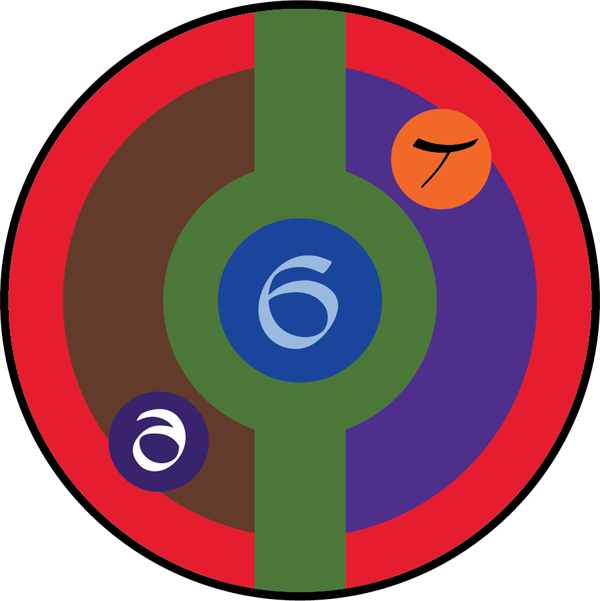 I guess I changed the proportions slightly as well, sorry.
Top

I'm going to question the use of Blue and Purple; those are insanely rare colors. Unless your islands had a magnificent trade history or huge agricultural output, I doubt you would have enough purple for flags.
Spoiler:
My minicity is Zyphrazia and Novland
What is made of man will crumble away.

Yeah, it's definitely an unusual colour scheme. Two types of purple contrasting with red. If, however, it's a flag designed in modern times, then they can pretty much do whatever they want.
Top

The modified flag looks almost exactly as I'd imagined it. :)

Out of curiosity, what's purple and blue dye made of, that makes them so difficult/expensive?
Diachronic Conlanging is the path to happiness, given time.

There was a small alignment error in my version of Sḿtuval's flag. I've fixed it now.
Top

Out of curiosity, what's purple and blue dye made of, that makes them so difficult/expensive?

clawgrip wrote:I'm wondering how they would fly a circular flag, ....

clawgrip wrote:I'm wondering how they would fly a circular flag, ....

You ought to read what he said, since he made it clear that there would be a blue or black "background" when the flag is flown, but otherwise documents and stuff just has the circular flag all normal. In otherwords, everything around the circle is NOT part of the flag, just there to allow the flag to fly.