by Man in Space

Sumerian proper, due to the range of degrees over which the stylus can be angled.

I have decided to redo, or am considering redoing, some aspects of CT.

- Changing the romanization of /θ/ from ð to z.
- Changing the romanization of /ɬ/ from ł to ś.
- As it stands now, CT has two plosives, /t k/. I'm thinking of making /t/ be more like /t ~ ɹ ~ n/, with [ɹ] being an allophone that shows up in most environments. This contrasts with true initial /ɹ/, so the /t ɹ/ distinction is maintained only in initial position. (You still might get some surface [t] thanks to loanwords or what have you.)
-- /t/ surfaces as [n] before an instance of /ɹ/ or /l/ (phonetically probably [ndɹ ndl]).
-- A corollary of this: Syllables with /ɬ/ are written using the glyphs for /l/ (CT cuneiform was imported from simplified Khaya glyphs). If I go the mostly-collapsing-/t/-and-/ɹ/ route, I might be able to get away with a defective writing system using only the /ɹ/-glyphs. (And maybe, just maybe, I can write /k/ using the glyphs for /ʕ/- or /x/-syllables? Or is that too defective?)
-- I'm thinking of keeping /t/ in sequences where it precedes an alveolar fricative, and possibly after /n/. Though I might make /nt θt st ɬt/ [ndɹ ðdɹ zdɹ ldɹ], just because.
-- /tk/ [tsk]? I think so.
- Thinking about getting rid of the collaborative voice. It's just too clunky.

I'm trying to redo the Patchwork States' language…I have a few bits of where I want to go but I am not entirely sure how to get there. What I want phonologically is:

One thing I might do is fortition of continuants in initial position:
f θ s x h ɹ l w j > pf tθ ts kx ʔh dɹ dl gw dʒj / #_
I'm not 100% sold on this. I don't know whether to employ it wholesale, to exclude /w j/ from it, to limit it to fricatives entirely, or to scrap it.

I also want a Latinate case system with four numbers: Singular, dual, paucal, and plural. The paucal typically means "some", but when employed with the definite article it means "many" or "lots of".

Is it a rip-off of Latin (specifically Ecclesiastical Latin)? Yes, with a bit of Tolkien thrown in. Do I care? No, because in-universe it's a liturgical language.

by Man in Space
So I've been working on the Tim Ar caste system (tël hukú—it's difficult to concisely explain what this means, but roughly 'census-ology'), as you can probably tell by the other thread.

Structure of the Caste System

There are four "levels" of classification. From highest to lowest, they are the méri, the múḫral, the akrár, and the këmêm. That aside, where I've given the different divisions below, I've given them in "prestige" order, most prestigious first. (There is no real difference in prestige among the four levels; everyone has one of each.)

I translate this as "varna", but it's more racially/ethnically determined than a varna is. There are eight émri:

- Hia: This refers to people descended from the Proto-Tim Ar-O cultural complex. The Tim Ar themselves, of course, are considered primus inter pares, which "equals" include the O, the gPangin, and several other lineages.
- Támrek: If you're Täptäg, you are támrek.
- Kán: Refers to the Caber. There is a long-standing population of Caber in the Tim Ar Empire, descended from refugees, and they're kind of seen as a "younger brother" to the Tim Ar despite being unrelated.
- Konrín: Refers to the people of Gereĝkuólo. Mostly the Irghal, but a few other groups too (such as the Oido).
- Sáĝit: Natives of the Mziddyun and, out of convenience and realpolitik, the Kgáweq'.
- Uiráha: The uiráha people groups are mostly endemic to the Burning Mountains or regions south of them.
- Kia: A wastebasket taxon.
- Uikúa: The primary constituents of the uikúa are peoples who have a bad history with the Tim Ar. This is mainly people who have attempted to or succeeded in conquering the Tim Ar at one point or another.

Four of these terms have their origin in Classical Khaya. Of these, three come from the practice that they liked to classify people according to their numerical bases: Hia are 'people of ten', i.e. the Tim Ar-O cultural complex; kia are 'people of six'; uikúa are 'people of twelve', which include the Khaya. (The modern uses of these words don't imply any particular method of counting.) Uiráha comes from CK wit'a-ha 'mountain people'.

Another three terms are demonyms. Támrek is basically as close as you can get to saying "Täptäg" in CT; kán is a loanword from one of the Mute Caber languages; Sáĝit is borrowed from what the Sengin call themselves, which term itself is an exonym from the Dujajikiswa.

I translate the term múḫral as 'class'. There are four úmḫral—these are ĝoksík, iĝl, îmrir, and ren. It, however, doesn't make much sense to discuss them without explaining the akrár ar, and this division is probably the most weaksauce/useless of them all. For now, I will list which akrár ar are part of which múḫral:

I translate akrár as 'caste'. We aren't quite down to the jati level yet; the akrár ar are sort of supertropes for the jatis. In any case, there are only thirteen akrár ar. I've listed them below with brief (and, in most cases, decidedly not comprehensive) lists of occupations you'll find in them.

I translate këmêm as 'jati'. There are too many ukemêm to list; one example is that of the boyar (óimi), which falls under the umbrella of the röz.

Strictly speaking, one's status within the caste system is inherited from one's father.

Prohibited Classes and Castes by Varna

Moving Up in the System

There are a few exceptions to this:
- If you depose the previous dynasty and install yourself as emperor, your family then becomes röz. (The perks of the throne…).
- Infantry—here, I'm using this as a shorthand for "soldiers who are in a role where they may be expected to do combat directly with other people"; this excludes the highest echelons, specialists, pilots, &c.—are considered konér for the duration of their active duty within that role. If they leave the military or are promoted out of combat, they lose this status.
- Meritorious conduct in the military can be a way to move up.
- Prisoners are considered konér. Upon completion of their sentence, they may revert to their original status unless they've been convicted of one of the Six Great Thefts, in which case they remain konér.
- Persons of unknown parentage can receive genetic testing. This is used to classify orphans and children of single mothers, but the exception comes in when someone is thought to be the child of one father but is actually the child of another. In those cases, as they have been alive a while, the person in question gets to choose which class or caste they want to be part of—that of their biological father or the father with whom they were raised.

Man in Space wrote: ↑08 Jun 2021 09:52 Is it a rip-off of Latin (specifically Ecclesiastical Latin)? Yes, with a bit of Tolkien thrown in. Do I care? No, because in-universe it's a liturgical language.

I don't know enough about Tolkien to recognize the Quenya/Sindarin/etc. influences, but I do like the idea of making a liturgical language that sounds like Ecclesiastical Latin.

by Man in Space
The other day I received a copy of Gordon Whittaker’s book on how Nahuatl actually had a logosyllabic writing system, and it made me want to do one for CT. Some preliminary concepts: 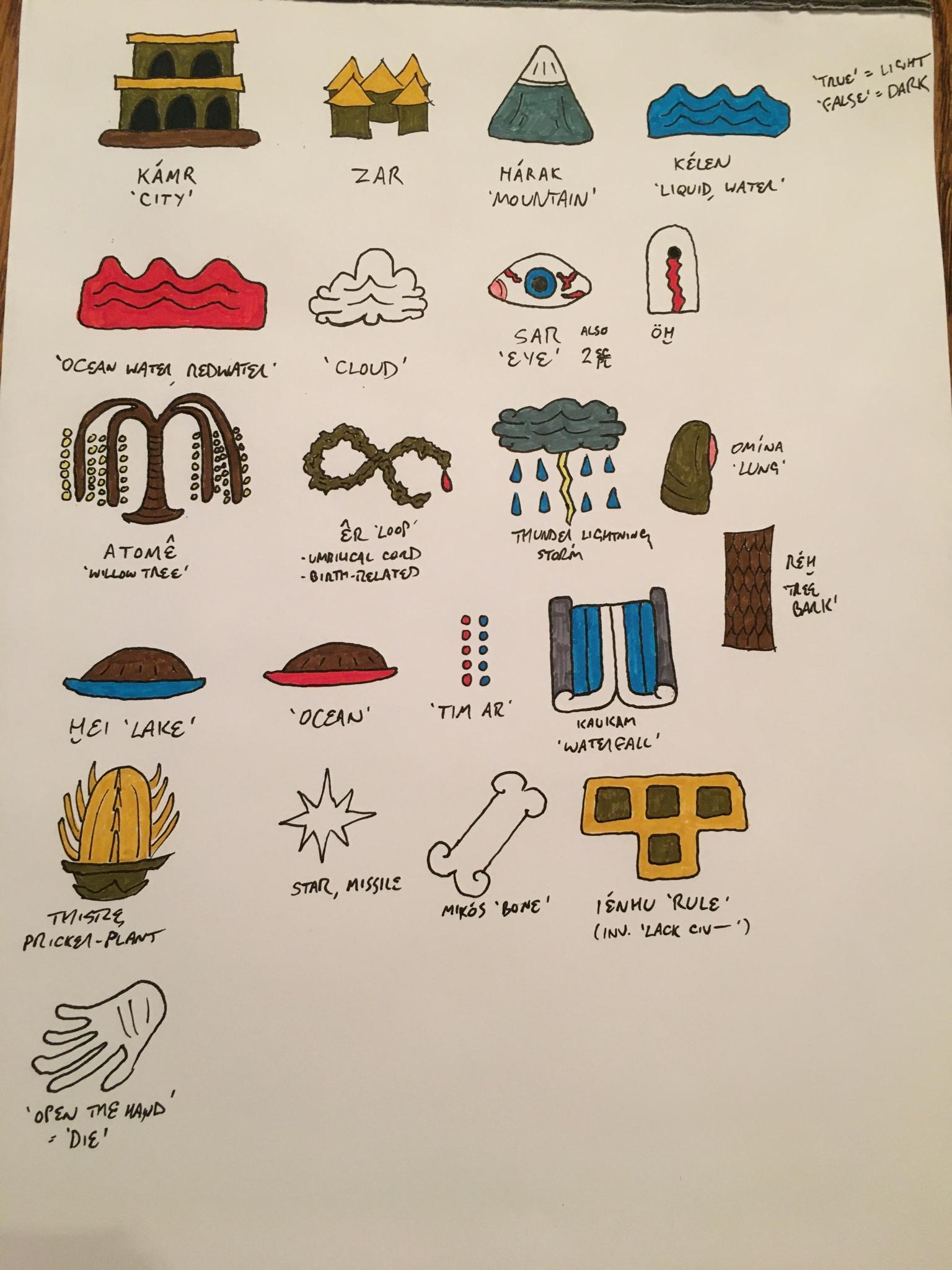 Color is a meaningful distinction in this system; sometimes, changing the color scheme of a glyph will yield a related word, a word for a related concept, or an antonym.
All times are UTC+02:00
Page 6 of 6