What can I say? It doesn't fit above, put it here. Also the location of board rules/info.
Post Reply
328 posts

If Nort doesn't mind, I'd like to start a CBB "metal thread", similar to the one over on the ZBB (because cross-board stuff

). Anyway, I'm not going to copy-paste Nort's original post, which you can find here, but at the very basic level, it's a thread in which to share both Metal music as well as views on Metal

Then you've got your Symphonic Metal stuff, as well as Gothic Metal and Industrial Metal (do people tend to count NDH as Metal or rock, sometimes it's hard to tell), but I can't be bothered with them right now :P

I used to have more before an old laptop of mine died, but this is what I've managed to regain since then.

EDIT: These are fairly general classifications. For example, Finntroll is basically a folk-black combination, swinging between the two genres depending on both album and song while Behemoth, generally considered a Black Metal band, became a lot more influenced by Death Metal, I think, as time went on. Further, bands like Sepultura, almost purely on the basis of their age, are hard to classify as a whole.
You can tell the same lie a thousand times,
But it never gets any more true,
So close your eyes once more and once more believe
That they all still believe in you.
Just one time.
Top

I knew at least someone would go there, but so soon? Haha 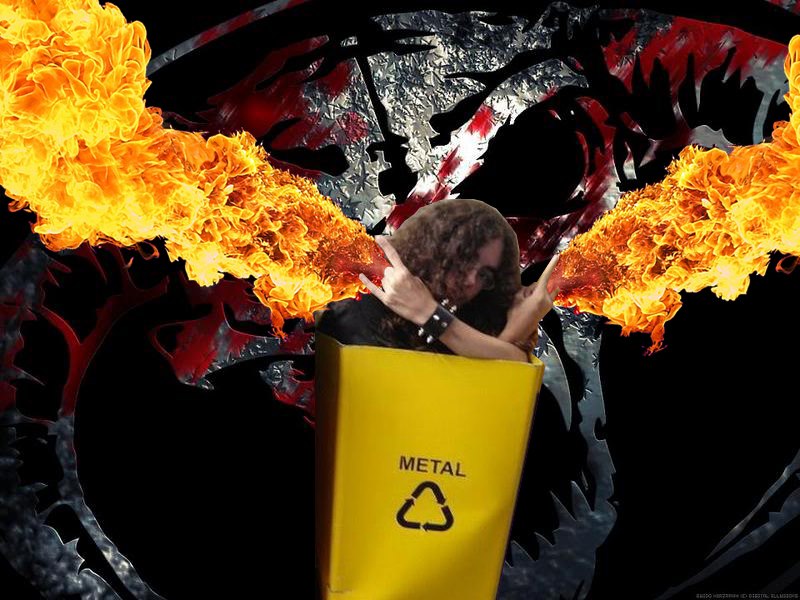 Doom:
Electric Wizard - I, The Witchfinder

I always feel intimidated in music discussions because my knowledge of it is quite shallow and I feel like that by speaking up my opinions I'm insulting people who really care about this stuff.
My pronouns are <xe> [ziː] / <xym> [zɪm] / <xys> [zɪz]

I always feel intimidated in music discussions because my knowledge of it is quite shallow and I feel like that by speaking up my opinions I'm insulting people who really care about this stuff.

I'm currently in love with this video:

Math Metal
Meshuggah - I am Colossus

it just goes so nicely with the music and the lyrics. I used to listen to much more metal music, but nowadays I tend torwards many different kinds of electronic music.

As for power metal, I'd like to add this. I'm not really into this kind of metal, but this song is just amazing.

Power Metal
Manticora - Help me like no one can
Top

Is their any folk metal without religious lyrics?
Many children make up, or begin to make up, imaginary languages. I have been at it since I could write.
-JRR Tolkien
Top

plenty, but it would be less time-consuming searchwise to find folk metal in a language you don't speak.
Top

I suppose that depends partially on how you define "religious". I think most folk metal doesn't have religious lyrics in the sense of explicitly promoting any religion, although lyrics taking inspiration from traditional beliefs, myths and folklore are common. Some individual musicians even seriously practice some form of paganism, but I'm fairly sure most are just fans of the mythological settings and stories (which I think is probably not too different from how some of us can be fans of a good conworld

) and/or just happen to think they make good settings for folk metal songs. As a possible example, there's a band named Cruachan whose songs feature both Irish mythology and Tolkien.

Now, somewhat anti-religious lyrics are quite common... Or at least lyrics depicting scenes from the Christianization of Europe from the pagans' (or trolls') point of view (which might or might not be the same thing, depending on who you ask - but in any case tends not to represent an entirely positive view of the Christians' role in these events). But plenty of bands don't have those either.

An example of a band I don't think employs any religious imagery (unless you count Davy Jones and stuff) would be the aforementioned Alestorm. Although whether or not they count as folk metal might be a little debatable; I believe the more exact term is [tʰɾʉ: skɔtʰɪʃ pʰəɪɾɪt mɛtʰəɫ] (or thereabouts).
Top

I'd pretty much agree with Xonen on this. The "religious" tone of Folk Metal, or at least what I listen too, ties in with the (generally pre-Christian) culture from which the band draws inspiration. Most of the religiosity is is basically based on the myths and legends of that culture but you also get songs about people from that culture or about historical events.

You do get anti-Christian Folk Metal, but that's, as Xonen suggests, mostly part of the pre-Christian vibe they're going for.

And yes to Alestorm, which can basically be summed up as "drink, pillage, sail, fight!"

...though I could never raise the temperature between my V-fingers high enough to ignite pyronadoes like that.

Here's some stuff for some quality headbanging and all. And few, if any, harsh vocals or subversive lyrics are involved.
Volbeat, Cape of Our Hero
Nightwish, Bye Bye Beautiful, Erämaan viimeinen
Lacuna Coil, Heaven's A Lie, End of Time
Epica, Storm the Sorrow
Kamelot, The Black Halo
Oomph, Augen auf
Ghost, Elizabeth
Dio, Rainbow in the Dark
And I'll dance with you in Vienna,
I'll be wearing a river's disguise;
The hyacinth wild on my shoulder,
My mouth on the dew of your thigh...

My ancientmost Headbanger cries out
and brings forth:

I can give other fraburden songs
of times of yore
Spoiler:
Black Widow Alice Cooper (w/ Vincent Price)
lest I date myself

At least if you date yourself, you'll know you're going to say "Yes!" by the end of the evening.

What happens when you mix thrash, black, power and neoclassical influences together in a great big pot?