What can I say? It doesn't fit above, put it here. Also the location of board rules/info.
Post Reply
86 posts

In other news, the far right ideologue Curtis Yarvin has a girlfriend half his age
Top

I feel that if politics was that simple, we'd have to just all agree on Goodocracy, i.e. the most good government, and that'd be that for political ideologies. in reality, technocracy is rule by unelected, designated (by whom?) experts (at what?) who are trying to maximize technical criteria (which?). this more often that not translates into business majors designated by oligarchs to try to make the world as profitable for their masters as possible through the worship of the magical economy number. "meritocracy" is tautological: of course the people who should rule as the ones who should rule, that's what should means, and also a begging of the question: what do you mean "deserve" to rule? who said people "deserve" to rule other people in the first place? plus, the question in politics is not just who should rule, but how, and meritocracy has little or nothing to say about that.
Top

Well, Torco, I can grossly summarize it by
Anyone who isn’t Trump > Trump
.


Anyway my preferences refer to my conworlds and concultures. I can say most of the inhabitants of any one of those systems believe they are under such a system and believe the descriptions I gave. Conflicts may occur as disagreements over how best to adjust the current best-approximation-we-could-manage to a somewhat closer-to-our-ideal compromise.

I don’t pretend I have any expertise on making these things reality IRL.
My minicity is http://gonabebig1day.myminicity.com/xml
Top

Well, Torco, I can grossly summarize it by
Anyone who isn’t Trump > Trump

Going back to the OG Political Compass test (although it looks like they've changed their questions a lot), I've come out with this: 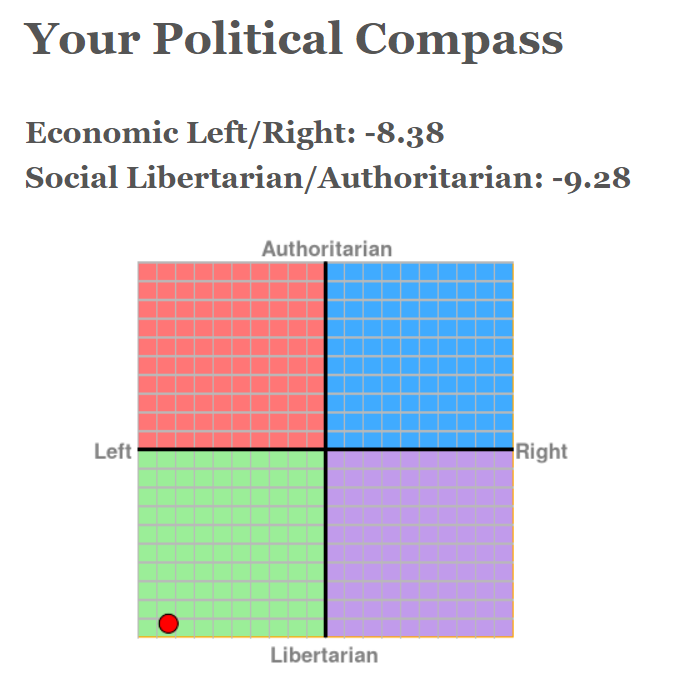 Completely unsurprising, I suppose, given other results elsewhere online, but I remember doing this at university maybe 14 years ago now (and now I feel old), and being in the top right corner of the "libertarian left" quadrant back then, and a lot of people I knew then thought that meant I was some sort of redbrick radical
You can tell the same lie a thousand times,
But it never gets any more true,
So close your eyes once more and once more believe
That they all still believe in you.
Just one time.
Top

Two main things first - 1) The number of seats is going from 72 on the old NYCC to 90 on the new NYC (so some of the district/ward boundaries have changed), and 2) the district councils are being abolished, with their various powers and responsibilities being taken over by the NYC

So, long story short, the Conservative Party went from holding 54 of the 72 seats on the NYCC (75%, given them a solid 18 seat majority) to holding 47 of the available 90 seats on the NYC (52%, giving them a very slim 2 seat majority). Even after everything that's gone on in the news, I'm a little surprised that they managed to "lose" as much of a hold as they did, coming two seats from losing control of the county council for the first time since 2001

Other than the number of independents who always gain a fair few seats, four other parties increased their share of seats, more than doubling, even tripling, in the case of Labour and the Lib-Dems, and the Greens going from nothing up to 5 seats:

I don't know if that's because there's more seats available, so the other parties have more of a chance at gaining a majority (under FPTP), or if it's purely down to recent discontent with the Conservatives

One thing to note, though, it that voter turnout, as is always the case with local elections, was very low, around 35% across the entire county council area, so even if the changes are down to recent discontent with the Conservative Party in the House of Commons, it wasn't enough to get people to come out droves on a local level
You can tell the same lie a thousand times,
But it never gets any more true,
So close your eyes once more and once more believe
That they all still believe in you.
Just one time.
Top
Post Reply
86 posts