I've been wanting to do something with this lang for a while. I don't have much yet, but I'm going to use this thread to post new things. I'll try to post something small every few days. Some of this post is copied and pasted from other posts, but I wanted to consolidate it.

Otvei is meant to be a personal language (not spoken by a conpeople). I'm not going to worry too much about naturalism, especially with regularity. It's going to be a pretty straightforward language.

The orthography is the same, except /ŋ/ is written <g>.

The actual phonemic realizations of /r, e, o, a/ in most positions are /ʀ, ɛ, ɔ, ɑ/, but it's easier to use more basic symbols (especially since they don't contrast).

Hangul orthography (No reason, other than that Hangul works well with this.)

Syllable Structure
(C)V(C)
Any consonant can be in the onset or coda.

Stress is not phonemic, but tends to be on heavier syllables towards the right side of a word (optimally penultimate). Coda consonants and/or [j w] make a syllable heavier.

Morphophonological changes
These may actually be more allophonic changes, but they only happen at morpheme boundaries. They are represented in the orthography.

Here's the script I made. It's difficult (impossible?) to make curved corners work in Fontstruct, with all the different character combinations, so I decided to stick with the blocky look for now.

To see what I mean, here are all the possible syllabic blocks (Warning: big): As far as grammar goes, I don't have much yet.
Word order: SOV
Nominative-Accusative alignment
Cases: Nom, Acc, Gen, Dat, Prepositional, possibly Instrumental
Noun-Gen order
Noun-Adj order
Prepositions
Subject marking on verbs
If you read all this, thanks for sticking around. Hopefully I'll post some more in the next few days.

nice (: can we borrow the writing system for our conlangs?
I prefer to not be referred to with masculine pronouns and nouns such as “he/him/his”.
Top

I really like the phonology section so far. One question. Is there intervocalic lenition (voicing of voiceless plosives)?
Creyeditor
"Thoughts are free."
Produce, Analyze, Manipulate
1

Creyeditor wrote:I really like the phonology section so far. One question. Is there intervocalic lenition (voicing of voiceless plosives)?

No, they stay voiceless, except after nasals, or adjacent to voiced fricatives.

I also made a noun declension with cases. I decided on including nominative, accusative, dative, genitive, and prepositional cases. All cases are marked with suffixes, but nominative singular is unmarked. Plural is marked with -u, which is inserted between the noun and the case marker.

Geez, this thing is quickly getting out of hand. I'm gonna need to seriously tone down the craziness if this language is ever going to work.
Last edited by Dezinaa on 12 Nov 2016 05:08, edited 1 time in total.

Na made some pronouns. Ev are pretty self-explanatory. What do nei think?

Vuo is inclusive, and pa is exclusive. Pronouns decline like normal nouns, but without the plural suffix -u (it's unnecessary).

I'm also working on translating country names. They're based on the countries' autonyms.

Dezinaa wrote:Na made some pronouns. Ev are pretty self-explanatory. What do nei think?

It's been a while, but I've made a small development. I decided how I want to handle numbers larger than 10. Let's take the number 654. This would be literally translated as "hundred six ten five four," or (100 x 6) + (10 x 5) + 4. This is because adjectives follow the word they modify. Also, numbers cannot take the plural suffix -u.

But for a number like 102, this could be confusing. Instead of saying "hundred two," which could be interpreted as meaning "two hundred," you would say "hundred and two."

Similarly, 112 would be literally translated as "hundred ten and two." This can't be confused with the grammatically incorrect 1002 (*ten hundred and two), because 1000 would have its own word.

If the rules for when to add the word "and" are confusing, just leave it out unless it's necessary for disambiguation. As for numbers larger than 9999, I don't know yet.

Here's a color wheel with boundaries for each color (not counting brown, black, gray, or white):
Spoiler: 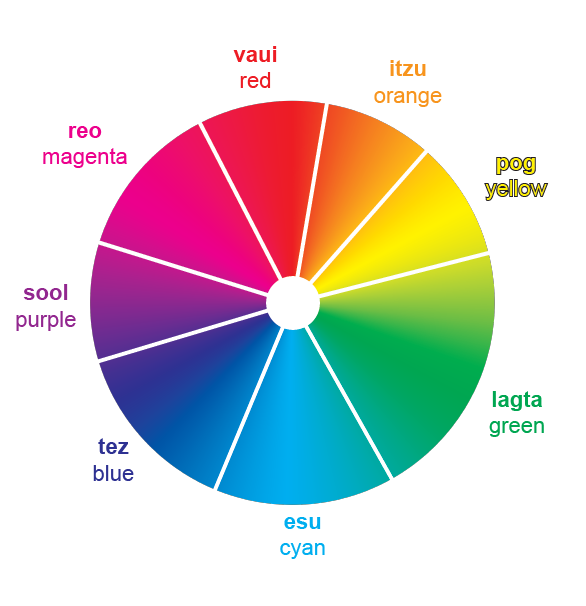 In addition, several words are used to distinguish variations of a color.