I've been tinkering around on a new conlang, as usual starting out with a premise - this time a phonology with underlying phonemes whose realisation makes analysis a bit of a pain - and then going down rabbit hole after rabbit hole, mostly grammatical ones, and changing everything time and again, and to give this process a bit more structure and finally set something in stone, I will now start posting about this lang!


This is the phonological inventory: 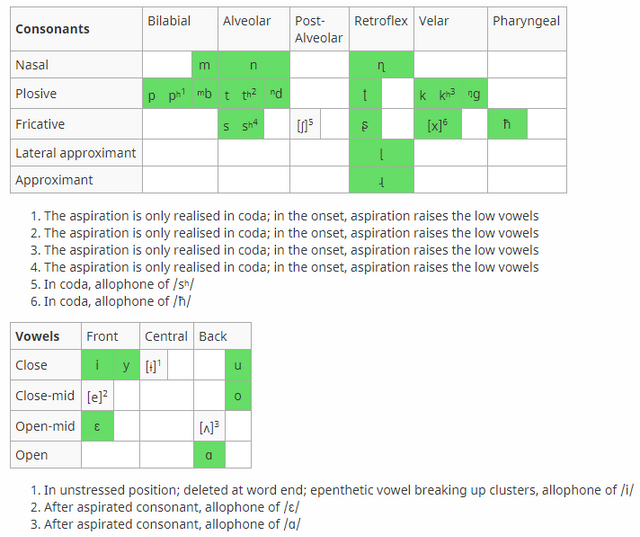 The syllable structure is (C)CV(C)(C), and the general phonotactic sequence is the following, but I guess there will be a good number of exceptions I haven't thought through yet:

So stops before fricatives before nasals/liquids in onset, and vice-versa in coda; [ɨ] breaks up clusters not following the rule as epenthetic vowel, but I've not fully decided on clusters of stops yet.

There are the following synchronic sound laws:


Now I have not yet gotten to any grammar yet, but can already say that there will be a verb template (albeit a small one, compared to most languages using them), pluractionality, nominative-accusative morphosyntatic alignment, but a certain degree of ergative verbal agreement, as well as noun incorporation where the nouns have to follow some form of vowel harmony.
Last edited by brblues on 15 Aug 2020 11:41, edited 2 times in total.
Top

First, though, let’s look at the more commonplace conjugation according to the grammatical subject.

The first thing needed is the verb root, which always contains only front vowels – the full verb in general is also limited to primarily front vowels, but there are a few tiny exceptions to this. The verb root I will use for the example is <bi> /pi/ = “to see”.

In the present tense and indicative mood, the personal endings for the subject are simply added to the root as follows:

NB: The 2SG form is identical to the root; the reason being that this was originally a polite form of address using the 3SG form (zero-marked at that point), but then became so widespread it became the standard form, and then when it came to be used as the standard 2SG form, the 3SG gained a suffix from a pronoun.

Using Mbath’s verb-initial default word order and the accusative preposition <tah>, we can now say thing such as:

NB: The accusative argument has to be indefinite as the verb is not marked for definiteness, and, depending on context, it could also refer to multiple men, as nouns themselves are not marked for number.

NB: While this sentence might give the impression of simple VSO order, this is actually coincidental: argument order to the right of the verb follows an animacy hierarchy, and if we were to say “a stone hits a man”, the order would be reversed.
Top

1) can the prenasalized stops contrast with sequences? e.g. you say /mp/ is pronounced as /mb/ but is that distinct from the single phoneme /mb/ or are they merged?
2) Did you mean to link to imgbb.com or is that some copypaste injection?

Thanks,
Pabappa
I'll take the theses, and you can have the thoses.
Top

1) can the prenasalized stops contrast with sequences? e.g. you say /mp/ is pronounced as /mb/ but is that distinct from the single phoneme /mb/ or are they merged?
2) Did you mean to link to imgbb.com or is that some copypaste injection?

2) That was not intended, I think imgbb, which I used to link the inventory, does that automatically. I'll check if I can delete it while keeping the link!

I've also noticed I forgot to provide the romanisation, will post it soon.
Top

I've made a minor change to the synchronic sound change rules, and removed the metathesis rules that changed //thn tn//, //phm pm// and //khn kn// to //nd//, //mb/ and //ᵑɡ//; I will probably keep them for a variety/dialect though.

Definiteness marking on the verb

Let’s look at some examples:

“The son is sneezing.” (Possibly an answer to: “Is that father that’s sneezing?”)

“A man kicks the stone.”

Here, it is the direct object to which the definiteness marked on the verb – by the feminine definiteness morpheme <kt>, because the Mbath noun for “stone” is feminine, although this is sadly not morphologically apparent – refers.

Forgive my ignorance / take it as curiosity willingly waiting to be informed: are there natlangs with consecutive aspirated stops forming a cluster, and both retaining aspiration? How exactly is this realised for you - with an epenthetic devoiced vowel, perhaps?
Top

Forgive my ignorance / take it as curiosity willingly waiting to be informed: are there natlangs with consecutive aspirated stops forming a cluster, and both retaining aspiration? How exactly is this realised for you - with an epenthetic devoiced vowel, perhaps?

Thanks for your interest

The issue in this lang would only affect clusters of aspirated stops occurring in the syllable coda, as aspirated consonants in the onset instead raise the following vowel. And in that case - consecutive aspirated stops in coda - the aspiration is just realised on the last stop of the cluster, a rule I'd forgotten to mention.

Mbath pronouns are fairly standard, and only the 3SG uses different forms according to grammatical gender, while the 3PL differentiates only between human and non-human. There exist a few variant forms, although none of them are too common.

Accusative forms are formed by using the ACC preposition <tah>, although some pronouns instead preferentially use suppletive forms:

Noun incorporation for definiteness-marking on an agent

To make the argument “man” here definite, the direct object “stone” needs to be incorporated into the verb. Given that Mbath verbs are subject to vowel-frontness harmony, the back vowel /o/, which is beforehand - being preceded by an aspirated consonant - raised to [ u ], is in the incorporated front fronted to [y], which is also reflected in the orthography:

Furthermore, the definiteness morpheme has to be changed because it now refers to a masculine argument.
Last edited by brblues on 06 Sep 2020 11:22, edited 1 time in total.
Top

Valency and the causative morpheme <teh>


Mbath verb roots are either lexically intransitive or transitive, but never both (ambitransitive). Both intransitive and transitive verb roots can generally be increased in valency by the causative morpheme <teh> in the relevant slot of the verb template (I will post the full verb template later, once I've outlined a bit more about what the parts mean)

For instance, the root <pmed> “to eat (something)” is transitive:

The complement <tah tso> is left out sometimes, but this is regarded as ungrammatical or uneducated by many speakers.

NB: Even though it is a lexically transitive root, the causative morpheme <teh> can be added to <pmed> - it then means “to feed” or “to make somebody eat”.

In the following example, the definiteness marker is used on the verb, and it must relate to the direct object (a “him” that was established in the context of the conversation beforehand) because the root <pri> “to help” is transitive and always requires an object:

While I was writing up the next bit of grammar to be unleashed here, I ran into an issue, or rather an element where I'm on the fence, so I'd like to ask for people's opinions about it.

I was now toying with the idea of making this conlang secundative, i.e. treating not the recipient, but the theme of a ditransitive verb as the direct object. A quick example - in the sentence: "I give the ball to you ", the theme would be
" the ball", "you" the recipient.

In combination with the fact that I can only make direct objects definite (by way of definiteness marking on the verb), however, this made me wonder what would be more likely to require specifying for definiteness - the theme or recipient of a ditransitive verb?

My own conclusion was that it is theme that is more likely to be marked for definiteness, since recipients are mostly animate, in particular frequently pronouns, which are definite by default. This makes me think I should rather go with the tried-and-true approach of treating the theme as the direct object. A counterpoint would be that I could find a reason for marking pronouns for definiteness - such as combining the definiteness marker on the verb with a pronoun implying focus or contrast some other pragmatic shenanigans. I still tend towards the former solution (i.e. an indirective language), but would be interested in hearing opinions.
Top

I vote secundative (dechticaetiative),
not on the basis that it fits better with what else you’ve decided,
but simply on the basis it’s what I’d like to see you do!
My minicity is http://gonabebig1day.myminicity.com/xml
Top

eldin raigmore wrote: ↑01 Sep 2020 23:07 I vote secundative (dechticaetiative),
not on the basis that it fits better with what else you’ve decided,
but simply on the basis it’s what I’d like to see you do!

I'm afraid I've decided against it, as you will see in the following post, but I will definitely keep secundative marking in the running for my next conlang

Some roots, such as <meṇt> (“to give”), are lexically ditransitive, i.e. they have two object arguments, one recipient and one theme; the recipient constitutes an indirect (dative) object, the theme a direct (accusative) object.

In verb forms made ditransitive by way of the causative morpheme that are translated in the form “to make somebody do X to something/somebody”, the first argument (in italics) is treated as the recipient, and the second argument (in boldface) as the theme.

Pri-teh-rik-∅-m mbu nyn ham?
/phɻi-thɛ-ɻikh-m nyn ħɑm/
[pɻi.te.ɻi.kɨm nyn ħɑm]
help-CAUS-IRR-2SG-DEF.MASC DAT 1SG Q
“Will you make me help him?” (in a context where it has been established who the definite masculine implied object marked on the verb is)
Top

Now that we already know about noun incorporation, definiteness marking and transitivity, we can finally take a look at the whole verb template! An important thing to note is that, through diachronic vowel harmony processes, verbs generally contain only front vowels, with the notable exception of the remote-past affix right in the very first slot of the template (derived from an auxiliary verb that only fused onto the verb quite recently). The template looks as follows:

* is also used for plural pronouns; making pronouns definite puts them into focus

Items in square brackets [] are optional.

The two items in parentheses () are optional, and must always be combined with the PST marker in the TAM slot.

A look at the template in action:

This single word, or translated sentence, of course, does not make much sense without context; but it makes clear that we action of feeding (“eat”-root plus causative) was performed in the past (past-morpheme in the relevant slot) by the first person plural (in the subject slot) on a grammatically masculine object (definiteness slot); please note that this object relates to what is being given (for example an apple) to somebody/an animal to eat.
Top
Post Reply
16 posts • Page 1 of 1