Yes I have always used k ever since early childhood .... mostly because I have other uses for c. At first, through IPA influence I used it for the palatal stop, then later for the glottal stop (it sort of looks like ʔ, albeit backwards), and now for /ts/, which functions as a singleton consonant in many of my languages.

Tolkien deliberately used c for /k/, though, because it has a definite aesthetic .... "Keleborn" just wouldnt have worked. Also at least for me, once i *know* that it's /k/, it looks more Celtic to me than Romance.

Orthography matters .... Tolkien also put a meaningless circumflex over the vowel in the name Adûnaic so we would know it was intended to sound more foreign than even other foreign names.
I'll take the theses, and you can have the thoses.
Top

^I thought about that, the meaningless circumflex sometimes used in fantasy languages. It does lend them a more "exotic" aesthetic.

It's true that in one language I've been drafting, I have a different use for <c> (to represent /ʧ/) but in this one I have no use for it other than an alternative for <k>.

Likewise, for Lihmelinyan I chose to represent /kʷ/ with <ku> in part because it reminded me of Hittite and so it would be symmetrical with <gu> as /gʷ/. (Even though I generally like <q> as a letter).
Top

As you've probably guessed from the word "Kankonian" (and ever more so, its endonym Kankonik), I prefer K for /k/. I also have planets named Keitel, Bikason, Kwemos, and Ptasiklo, and countries named Kolotha and Deksad. Although I have QU for /kw/ in Querre and the name of its lingua franca Quispe.
♂♥♂♀

My Kankonian-English dictionary: 77,000 words and counting

Usually, yes. But 'c' is better for certain effects - Romance, but also Latin, Celtic, etc. In generaly I think people see it as more 'civilised' than having 'k' all over the place.

If using 'c' makes it look TOO Romance for, you, have you thought of using both 'c' AND 'k' (either phonetically distinguished (surrounding vowels) or just graphically ('k' in clusters, perhaps)). Having 'k' at all is quite a powerful way to shout 'not Romance!' at people (who don't know about Picard)...
Top

I'm not generally adverse to the letter K as a concept or a phenomenon, just don't use it very often.
Top

I generally use <k> for /k/, unless there's a particular reason to do otherwise. In Silvish, I probably would use <c> (and <qu>), given it's a Romance language, and I did for quite a while. However, as I've worked on transcribing the dialects, I don't like that it creates an orthographic difference between cognate words that reflects no actual difference in pronunciation. For example, the word for "mascot" is pronounced [maˈskuta] in one dialect and [maˈskøta] in another. With <k>, they both use the same letter for that [k] — maskouta and maskeuta, respectively. But if I used <c~qu>, it'd be spelled mascouta and masqueuta, with different spellings for the same sound.

Regarding Arculese, using <c> to reflect an alternation between [k] and [c] sounds like a good idea to me. I couldn't comment on how that'll make the language look, but I got over any misgivings about using <k> in a romlang, so anything is possible, right?

Thanks for your answers.

I did not, in fact, know about Picard.

Oscan has been a major influence on Arculese and in transcriptions of it I see <c> and <k> and I like them both! Decisions, decisions...
Top

Depends on the aesthetic. Usually I use <k> because it just feels more natural, being Finnish, and because it's the one used more in most of the languages I'm into.

Also, I can't help but think of /s/, /t͡ʃ/ or /t͡s/ if I see <c> before front vowels, the specific one of those three being determined by which language the overall vibe of the orthography feels like haha. I agree with Pabappa that <c> also feels Celtic, but more like Romance or just straight-up Latin if the orthography has more of that vibe.

Even with Latin, though, I just think the classical pronunciation sounds weird because I was first exposed to <c> in English and tried to learn Spanish and French in my teens and early twenties, so... uh.

And yeah, my first conlang was also a romlang so that further solidified the idea that <c> must have different pronunciations before back and front vowels even in conlangs. It was a terrifyingly bad romlang, I realised that very early on, but a part of me wants to look at my notes and start working on it again just for the cringe... but I might have a cringe attack if I tried. Well, not that technically <k> doesn't have "different pronunciations before back and front vowels" even in Finnish, since it is more back before /o/ especially and more front before /i/ especially, but... I mean, it's literally like [k] and [k̟] or maybe [k̠] and [k̟ʲ] at the absolute extremes (I know I occasionally back /k/ a little tbh, but it's inconsistent and only if I'm talking fast and/or really relaxed I think) and no one could ever suggest that they're anything other than the same phoneme /k/.

Also, like Sal said about it being perceived as "civilised", to me it can have that snobby elitist "high class" vibe but it really depends on the rest of the orthography. This wasn't something I thought about consciously until an absolutely braindead white supremacist user on a certain site claimed that "white languages use C and non-white languages use K", like wtf???? Even all the Germanic languages use <k>, like... bruh. He was Portuguese (or maybe Brazilian), so at least it wasn't like his own native language used <k>, but it was still an absolutely shocking level of ignorance and idiocy (it was also one of the countless things that really hammered it home how insane the alt-right is, making it easier for me get out of that rabbit hole before falling in too deep). That made me realise it was something I'd heard Latin geeks say in less explicit terms, although I'm not sure if they'd meant it in a racist way. Still, the kind of elitist attitude like "C is more sophisticated than K" seems pretty common among people who're obsessed with Latin... not people who're just learning Latin, but the kind of Latin geeks that think it's in every way the best language in the world and have long rambly debates about how to pronounce it in the most authentic classical way that delve into borderline spirituality, you know?

So, it really depends on the vibe of the language. If it's a romlang or celtlang, then <c> makes perfect sense. Same if conically its orthography was devised by missionaries or something or they wanted to emulate a European vibe or whatever.

Using <c> for /d͡ʒ/, like in Turkish, is something that would make me cringe outside Turkish or languages whose orthography is directly influenced by that of Turkish, though.

The absolute worst sound to use <c> for, though, would be /p/. Like, that just wouldn't make any sense.
Top

^I was first exposed to Latin in the Catholic church, so for me I still much prefer the sound of "Italianate" Latin. (So sue me for reading "veni vidi vici" as /ve.ni vi.di vi.ʧi/

And that sounds like good advice. The thing is, Arculese is inspired by Italo-Celtic, but isn't fully a posteriori. And I do kind of like the look of <k> in Oscan. I'm leaning toward <c> at this point, but we'll see.

I need some aesthetic feedback on my vowel diacritics. The language I'm working on marks creaky voice and irregular stress with a dot and grave accent, respectively. (Image because Unicode isn't behaving itself on the forum.) 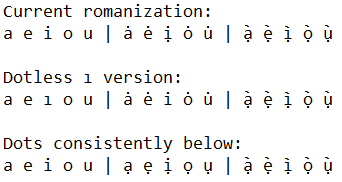 The "dots consistently below" one looks the best on its own imho, but a thing to consider (or at least that I usually consider) is whether consonants have more diacritics above them or below them (if at all), and then have the opposite be the default on vowels. So if the language had eg. <ť ǩ č š ř ľ> or <ţ ķ ç ş ŗ ļ>, with the former diacritics below the vowel would make it overall more balanced while with the latter diacritics above the vowel would look more balanced, eg. <ǩạš> vs <ķȧş>. Of course it's extremely subjective and depends on the language's overall aesthetic, but to me <ǩȧš> does look less pleasing than either of the previous two. Since you're also using a grave accent together with the dot, that's another reason why the dots being consistently below would make more sense.

(Although for some reason macrons don't trigger that "diacritic overload" for me as easily as eg. acute/grave accents and circumflexes or tildes or whatever.)
Top

well it depends .... is creaky voice confined to stressed syllables?

Vlürch wrote: ↑12 Aug 2021 07:04 The "dots consistently below" one looks the best on its own imho, but a thing to consider (or at least that I usually consider) is whether consonants have more diacritics above them or below them (if at all), and then have the opposite be the default on vowels.

I only have diacritics on vowels, but that's a very good point to consider!


Vlürch wrote: ↑12 Aug 2021 07:04 Since you're also using a grave accent together with the dot, that's another reason why the dots being consistently below would make more sense.

That's what I was thinking, too. I do prefer how the unstressed vowels look with the dot above, but the inconsistency bugs me a bit.

I have to concur about the dots below version. It looks more unified and consistent especially with creaky voice and stress being separate.
Top

My vote, too, for dots below.
... brought to you by the Weeping Elf
Top

Dots below it is!
Top

Do implosives occur in consonant clusters? I find it hard to articulate
Top

IIRC correctly, most languages with implosives have a relatively simple syllable structure, but this might be a coincidence. Ejectives definitely occur in clusters though.
Creyeditor
"Thoughts are free."
Produce, Analyze, Manipulate
1

I'm deriving a conlang from Old Japanese (and Middle Chinese to an extent). I have no proof that the phonemes represented by i2 and e2 would be rounded, but I've decided to interperate them as such. What are some fun sound changes I could use so that syllables with i1/2 and e1/2 result in different reflexes in the daughter lang without just resorting to "i1 and e1 palatalize, i2 and e2 don't". Cuz that's my current idea for it but it seems kind of boring.
Top
Post Reply
765 posts