The Old Ruritanian stage is not well-known, but mostly surmised from fragmentary evidence from the past as well as meticulous study of the present language. It can be safely said that the language spoken in the 11th century by the Ruritanians, which is what we shall refer to as Old Ruritanian in the following, was a far cry from a pure descendant of the fabled Ancient Ruritanian tongue, but had been bastardised in multiple ways through contact with Hellenic, Slavic and Magyaric languages. The traces of this bastardisation can be found in the modern language.

I shall begin this exploration at the assumed state of the Old Ruritanian language, which knew no conjugational suffixes, but was on its way to gaining them, namely through the aforementioned frequent contact with speakers of other languages. My phonemic notation follows Brumière’s revised system (cf. Alphonse Brumière: Reconstruction de la phonologie du ruritanois archaïque. Deuxième édition, 1861.)

I have reconstructed Old Ruritanian syntax as follows:

For the time being, please disregard the two terms referring to pronouns. Ignoring these, an Old Ruritanian sentence might have read as follows, using reconstructed vocabulary as per Brumière:

The verbal suffix ti was identified by my esteemed colleague Friedrich Hopfert from the University of Berlin in his seminal work Betrachtung der Geschichte des Ruritanischen, to which I owe a great debt. It was also he who traced its origin to the Common Slavic tongue, whence it had presumably been loaned by the Ruritanians (or vice-versa).

Please note that the above sentence would in fact have been ungrammatical in Old Ruritanian; the focal pronoun was mandatory for a complete sentence.

The thematic pronoun was also obligatory, though only if the topic of the sentence was in the third person; then this pronoun, agreeing with said topic in grammatical gender, would follow it.

Both topic and focus are third-person masculine arguments; nonetheless, the information is added that Alan, the focus of the sentence, is actually the accusative argument. I shall get back to the exact forms and use of these additional set of pronouns (in addition to standard personal pronouns, which in Old Ruritanian did not strictly distinguish between nominative and accusative) shortly, but I think it would be prudent to first address their origin.

My theory about how these pronouns came into being is grounded in the reality of multilingual life in the Old Ruritanian Age, when Common Slavic, Old Hungarian, Byzantine Greek and possibly others were all spoken in addition to Old Ruritanian, often alongside one another. It is my assumption that a great deal of pointing would have taken place to get one’s point across, both literal pointing with one’s fingers and verbal pointing, though not in the form of demonstratives, but a repetition of pronouns. What was once only used in specific circumstances then became a means to express emphasis and then lost meaning altogether, turning into a fossilised yet obligatory part of the sentence.

The very nature of the forms of these pronouns appears to favour this theory as to their origin. Whilst the thematic pronouns were identical to the native set of Old Ruritanian personal pronouns – and played no role in the development of the verbal system, instead leaving their trace in the noun system –the focal pronouns are mostly loaned pronouns from other languages, certainly with the intent of facilitating inter-lingual understanding.

A table of my reconstructed forms looks as follows: 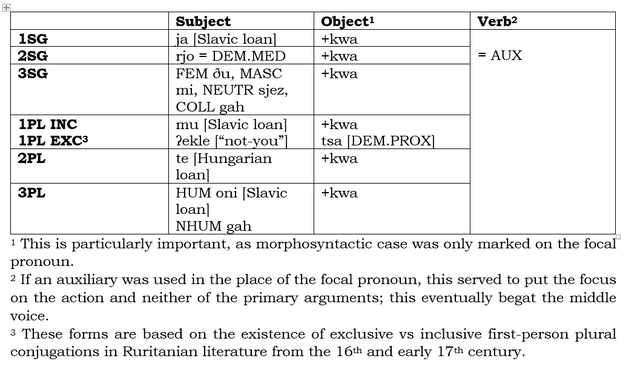 Later on in the development of the Ruritanian tongue, after these focal pronoun forms had standardised and fossilised, they fused with the verb, to give us the Modern Ruritanian verb endings – naturally, sound changes have changed the eventual outcome quite a bit: 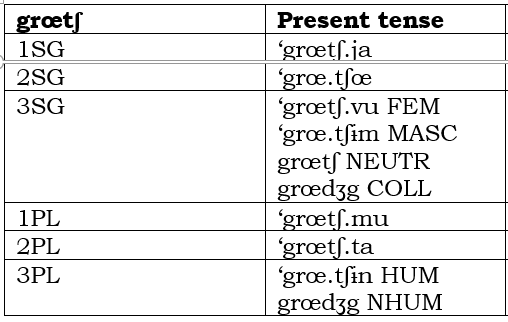