Solenja is a Romance language (creole) and will be spoken in the Republic of Solenja / on the Island of Solenja. 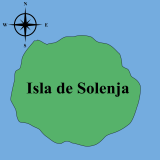 Two examples for a sentence in Solenja.
Spoiler:

maybe more.
all rules & other stuff:
Spoiler:
Adjective come after the object.
esta un dia solinia > it is a sunny day.
is INDEF.ART. day sunny.
esta means „am“, „are“ & „is“

at (place) en la [in the]. at the bakery > en la panaderia.
En la panaderia daro esta pan. There is bread in the bakery.
in DEF.ART bakery give it bread. 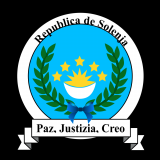 First question: Is this a divergent Romance language, or is it a creole (like Lingua Franca Nova)?
♂♥♂♀

I would say yes, i think.
I wanted, to be easy(easier).
i didn't know Lingua Franca Nova.

Solenja is based on: Spanish, Italian, Portuguese, Basque, Romanian, maybe Esperanto and one more.
Top

That wasn't a yes-or-no question.

(a) A divergent Romance language

Lingua Franca Nova, or LFN, by the late C. George Boeree, is an auxlang based on Romance lexicon with a creole's grammar.


Solenja is based on: Spanish, Italian, Portuguese, Basque, Romanian, maybe Esperanto and one more.

Esperanto? Is this an auxlang? Or is it an artlang? You said it was spoken on an island.
♂♥♂♀

Solenja is a creole.
Esperanto is a auxlang, if you mean this.

Solenja was started as a „artlang“ but it would be me happy, if it comes to a auxlang.

Yes, my language is spoken on my fictional island.

Ah, I see. That was what I suspected. Romance without genders nor articles!


Esperanto is a auxlang, if you mean this.


Solenja was started as a „artlang“ but it would be me happy, if it comes to a auxlang.

Yes, my language is spoken on my fictional island.

So it's a fictional language (artlang) and a creole. Got it.

your welcome.
I often subconsciously confuse people somehow ... and my bad english make it not better^^


father/feather (the E at the end of many german words)

Also: How did Esperanto become a contributing language? Was there a sizeable Esperanto-speaking community on the island, along with the speakers of the Romance natlang from which Solenja evolved and the speakers of the "exotic" language that influenced its simple grammar?
♂♥♂♀

Ah, I see, reading it again: no genders, no verb conjugation, and no tenses (tenses are what "times" like past, present, or future are called in English). Somehow I misremembered that as no articles.
♂♥♂♀

The Esperanto thing. Not every word is shitty^^
I used 5 languages and seldom Esperanto.

But sometimes we just use the schwa: /əv/. That's in quick, everyday speech, in sentences wherein "of" is an unimportant word.


The Esperanto thing. Not every word is shitty|_|
I used 5 languages and seldom Esperanto.

Or did all four of those Romance languages, plus Basque, bring speakers to the island, causing the developers of the creole to borrow different words from different modern Romance languages?
Last edited by Khemehekis on 05 May 2021 22:05, edited 1 time in total.
♂♥♂♀

But sometimes we just use the schwa: /əv/. That's in quick, everyday speech, in sentences wherein "of" is an unimportant word.


I think the most words are coming from spain/portugal.
the others language are not so often be used.
Top

Go to this chart where you can hear the sounds spoken:

and tell me which IPA symbol the O in Solenja sounds like!
♂♥♂♀

The Close-mid O.
I think, we have in german only the short and long O...

We don't have that in English.

Instead of using an English example, just use the IPA symbol and say "This is the sound /o/, as in the German word 'froh'."
♂♥♂♀

Vowels can be confusing, so they should all use IPA symbols.

i have edit All vowels.
Questions you never asked yourself ^^

I'd just like to point out: take some of what Khemehekis says with a big pinch of salt, because he's talking about his own, American dialect.

Likewise, the description Khem gives of the final sound of 'father' is accurate for Americans, but in southern England, Africa and the Antipodes, this sound has lost its rhotic quality entirely and merged with the final vowel in 'comma'.

If you want more discussion:

Spoiler:
[I'm a bit confused by Khem's "O"s. First, "short O" is a bit of a misleading name in American, because this category also includes words with "A" - palm, father, car, etc (this vowel set has a different vowel from the 'short O' set outside the US). A couple of his words actually aren't in the "short O" set at all for most Americans - "soft" and "off", as well as "dog", instead have the vowel of "caught" and "law" (as they do in old-fashioned, but not modern, British). This vowel is /ɔ/, and is indeed also the vowel that non-Americans tend to have in "fork", "horse", "port", etc. However, in American dialects, the sound in "horse", "fork", etc is often raised to /o/ instead, particularly in dialects that otherwise merge /ɔ/ with the "short O" vowel. Oh, and in traditional non-American dialects, "mourn" has another vowel from these entirely, but admittedly that's gradually dying out.]

Oh, and in a lot of American, the "long O" sound actually is a monopthongal /o/. Conversely, apparently in parts of northern Germany and Austria, German /o/ can actually be a diphthong, as in most English.

Anyway, traditionally German has two "O" sounds, distinguished by both length and quality: long /o:/ and short /ɔ/. It can also get more complicated before R.
English, however, traditionally has at least THREE "O" sounds: long /o:/ (which is actually more like /ou/ in most dialects) AND /ɔ:/, and short /ɒ/ (which most Americans merge with an "A" sound) - but which words have which sound varies between dialects. I can't speak for Americans, but English people hearing German, because our /ɔ:/ is long, often hear German short /ɔ/ as our short /ɒ/.

[it used to be worse: hoarse and horse used to have different vowels too. Fortunately that's almost extinct now.]
Top

Thank you Salmoneus for your input / explanation.