This thread will serve to showcase typological studies and generally interesting tidbits on the languages of my conworld Frēdauon. At some point there should probably be a overview post, but I will leave that for the future. The first post will be a research paper on vowels in my conlangs. I tried to keep it short but I got carried away.
Vowel inventories in the languages of Frēdauon

This research paper provides an exploratory study of the phonemic vowel quality inventories in the languages of Frēdauon. A bimodal distribution is diagnosed with three vowels and five vowels being the most common inventory sizes. Examples data of typical vowel quality inventories and outliers are discussed seperately. The outliers are explained as resulting from a diachronic process of transphonologization.

1. Introduction
Vowels are the most sonorous category of sounds in languages. They canonically form the nucleus of a syllable and include the sounds /a, e, i, o, u/ in many languages. Vowel quality is usually defined as including vowel backness, vowel height, lip rounding, and tenseness. Vowel backness and vowel height can be described articulatorily as refering to the position of the highest point of the tongue while producing the vowel. Some languages also distinguish vowels based on the presence or absence of a rounding gesture produced by the lips during the articulation of the vowel. Tenseness is less easily explained and has been traditionally linked to the tenseness or laxness of the muscles involved in articulation. In some languages a similar distinction has been linked to the relative position of the tongue root.

In the following table the vowel quality inventory of Kobardon (Northern, Northern Mountains) is given. Two front vowels /i, e/ , a central vowel /a/, and two back vowels /o, u/ are distinguished by backness. The two back vowels are also rounded. On the height axis, high vowel /i, u/ are distinguished from mid vowels /e, o/ and the low vowel /a/. Tenseness is not employed contrastively, here.


A variety of distinctions are ignored in descriptions of vowel inventories and in this study specifically. Languages also distinguish vowel length in their vowel phoneme inventories, manifested mainly by phonetic duration differences. Additionally, vowels can be produced with additional airflow escaping through the nose, resulting in so-called nasal vowels. A variety of distinctions are related to voice, i.e. the vibrtation of the glottal folds. None of these distinctions will be discussed here any further.

It should be noted that any phonemic inventory always involves a certain abstraction. Vowels can be judged to be contrastive based on minimal pairs and this can be incorporated into an analysis. A distinction is said to be contrastive, if there is some pair of words that is only distinguished through this feature. The actual phonetic realization might occur for different speakers or in different lingustic and metalinguistic contexts. In Kobardon for example, additional phonetic vowels [ɪ, ʊ] can occur. These are restricted to a specific position and can be analyzed as resulting from reduction of mid and high vowels /i, u, e, o/ in phrasally unaccented positions. More than one analysis might suit the same set of data and there is no guarantee that there is a unique `correct' or superiour analysis for any given vowel system in a language.

A sample was generated that included any language from Frēdauon for which sufficient documentation is available that includes both a language endonym and a vowel inventory. The language was neither controlled for language family nor for linguistic area. This yielded a sample size of N=99 languages.

The following graph shows the results of this study. The number vowel phonemes in the languages of Frēdauon ranges from a single vowel (n=1, Dhā́ddwã) to 16 vowels (n=1, Late Omlüt). The mode and the median coincide at a five vowel system, which is found in 27 languages. The arithmetical mean is at 5.44 and the standard deviation is at 2.512. 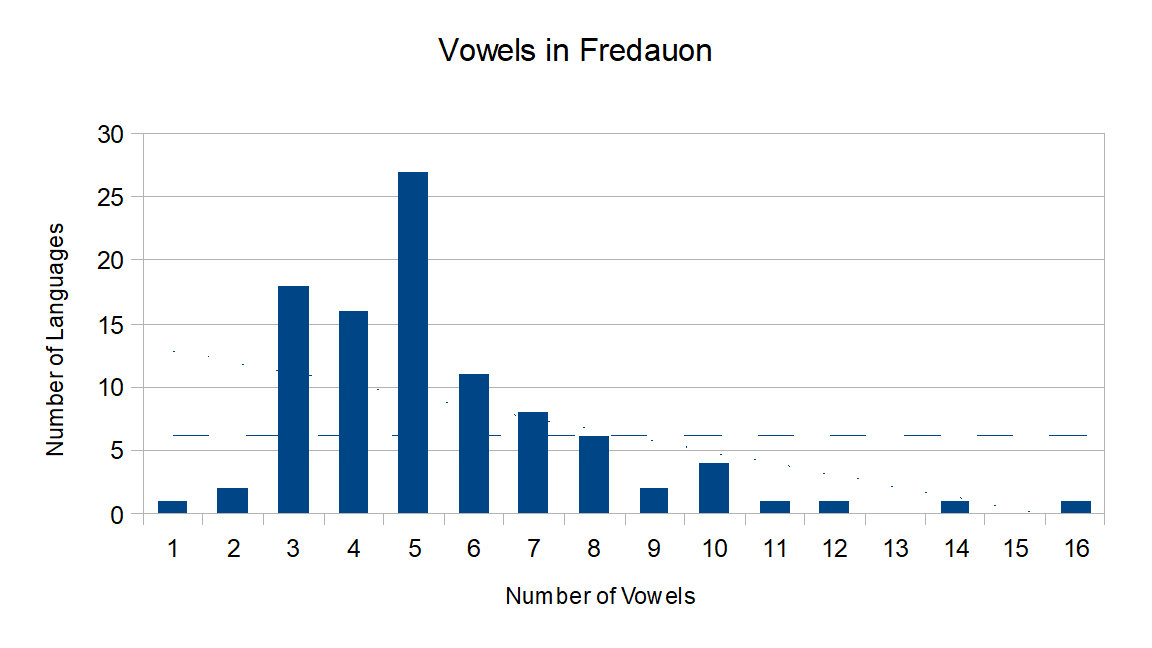 Kobardon has already been shown as a typical five vowel inventory. The second most common vowel inventory is a triple. One representative example is Tlák'áta (Black languages, various places). The vowels are distributed evenly across the vowel space, only occuring at the edgemost corners. The front high vowel contrasts in both rounding and backness with the back rounded vowel /u/. The only low vowel /a/ on the other hand is also the only central vowel.

Dhā́ddwã (isolate, Great Western Bay) has been analyzed as having a single underlying vowel whose vowel quality is completely determined by phonological context. Note that Dhā́ddwã has labial/labialized and palatal/palatalized sounds that influence the backness and rounding of the surrounding vowels. The backness and rounding dimensions of vowels have become transphonologized onto the consonants.

On the other end of the scale, we find Late Omlüt with 16 vowels. Vowels contrast for rounding, backness, height, and tenseness with a few gap interspersed into the vowel space. Again, the vowel quality difference can be diachronically explained. In the predecessor language Modern Omlűt, a variety of vowels quality could be derived from a three full vowels /a i u/ by a morphophonological process called Umlaut. This process is not transparent anymore in the successor language Late Omlüt. Therefore, these vowel quality differences have become contrastive. Additionally, Umlaut in Modern Omlűt yielded vowels that differed in length only. These length differences have been transphonologized into vowel quality differences in Late Omlüt. Yet another distinction that has influenced vowel quality is stress. Modern Omlűt featured a distinction between syllables with full vowels and syllables with the reduced vowel /ə/. The reduced vowel split in the development of Late Omlüt depending on the quality of the preceding value, yielding another set of phonemic vowel quality distinctions, especially after stress shifted.